Things are going swimmingly here at Pixel Trickery HQ, so here’s a short but sweet update! It’s the opposite of me – I’m tall and sour.

First of all, the eponymous exciting announcement – thanks to your generous funding, I’ve been able to hire amazing games composer Zach Beever to compose the soundtrack for A House of Many Doors!

This is an exciting moment for me, as I’ve been a fan of Zach’s music for a long time. He composed the soundtrack to indie game Project Zomboid, which has some of my favourite music of all the games I’ve played!

Why not take a listen to some of his tracks?

I’m not the only one who thinks Zach’s music really stands out – when John Walker reviewed Project Zomboid over at RPS, he commented specifically on the quality of the soundtrack, saying that is “some really quite astonishingly good music (I’m leaving it playing as I write this, and fancy writing everything else ever to it just now).” Cassandra Khaw called it “one of the most haunting sound tracks I’ve ever had the pleasure of encountering.” It’s OK to be excited now.

I think Zach’s talent and style will perfectly complement the game’s atmosphere. I hope you agree.

Speaking of endlessly talented people, Catherine has been hard at work on arting up the place! I have another early character sketch to show you – please give a big hand for the delightful Tera Skae. 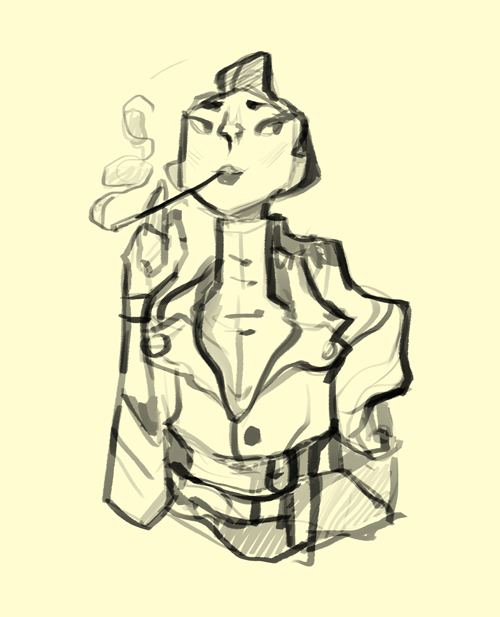 Tera is charming, loquacious, and very good at keeping up appearances. She is always friendly and often funny (albeit sometimes a little condescending). But there’s something uncanny about her ability to keep so perfectly and constantly poised… It must take a lot of effort.

She’s damn good at her job, though. She seems to have contacts all over the House – and you might find that her extensive network of friends and favours comes in handy!

That’s all for this week, folks! By the way, if you’re a Trickster-tier backer or above, please check your inboxes – there are a few things I still need from most of you to fulfil your rewards.

Cheerio. Next week I’ll share some exciting stuff from my end of things.

Exciting Announcement: A new member of the HOMD team throws their hat into the ring!